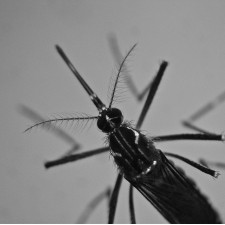 European Cooperation in Science and Technology (COST) Actions are bottom-up science and technology networks funded by EU, which offer researchers and stakeholders a range of networking tools, in order to enable breakthrough scientific developments and to strengthen Europe’s research and innovation capacities. The COST Action “Aedes Invasive Mosquitoes” (AIM) has been awarded four years of funding to foster the development of synergies between scientists, stakeholders and decision-makers and improve preparedness necessary to prevent significant public health risks caused by invasive Aedes mosquitoes.

There are at least four mosquito species that are aggressive day-time biters capable of transmitting viruses. These mosquitoes have travelled to Europe from Africa and South East Asia on planes and ships, through imported items like used tyres and lucky bamboo. Most famously, the Asian tiger mosquito, which arrived in Albania in 1979, and has since spread across Europe, has already been responsible for recent local cases and outbreaks of chikungunya and dengue viruses. These diseases cause acute fever - arthralgia and there are no specific therapeutic agents to treat infected people.

To combat the growing concerns over these mosquitoes and minimise disease risk, the group of researchers from 29 countries in Europe and neighbouring regions intends to build capacity across Europe to address the heterogeneity in preparedness and capacity to fight against AIMs. This will be achieved by assembling a critical mass of medical and veterinary entomologists, epidemiologists and public health professionals to create a broad consensus on how best to implement surveillance and control interventions within a standardized, innovative and sustainable framework, taking advantage of modern citizen science approaches.

Moreover, the Action will trigger optimization and innovation in AIM control and in the assessment of the cost-effectiveness of traditional and innovative approaches. Modern citizen science methods will be applied in order to exploit and harmonize the use of public health surveillance data and spatial analysis methods across Europe and to streamline the analytical, modelling and mapping process.

The final goal is to refine and deliver customised guidelines for AIM surveillance, monitoring and control, teaming up with international agencies (e.g. ECDC, EU-WHO, EMCA, ECSA) and the public health community to promote their implementation at national and local scales. In addition to international agencies, multiple stakeholders will actively engage, including government officials, local pest control agencies and most importantly the public, to achieve maximum impact.

AIM-COST Action is open to inclusion of Institutions from all countries with management committee’s approval.

For a printable version of this press release [PDF]