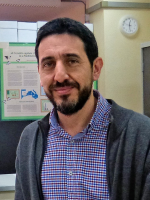 University of the Balearic Islands. Spain

Role and main activities in AIMCOST

Dr. M. A. Miranda is Senior Lecturer of Zoology at the University of the Balearic Islands since 1995. His scientific career began with the study of the parasitoids of the pine processionary (Thaumetopoea pityocampa). From 1995 to 1999 he conducted his PhD about the Mediterranean fruit fly (Ceratitis capitata). From 2000 he started to work on the vectors of the genus Culicoides (Ceratopogonidae), transmitters of the bluetongue virus. The activity on those vectors has occupied much of his scientific research over the past 19 years, being member of several international committees. Research during the period 2000-2019 has also included other groups of vectors, such as ticks, sandflies and especially mosquitoes, such as the Asian tiger mosquito Aedes albopictus. Similarly, he has also conducted extensive scientific work in the study of other insects of economic importance, such as Hymenoptera, the red palm weevil; parasites of bees, such as Varroa destructor, and parasites of domestic animals such as Oestrus ovis. Since 2017 he is also working on the bioecology and control of the Aphrophoridae (Hemiptera) that transmit the bacteria Xylella fastidiosa in the Balearic Islands. Since 2015, he is member of the Animal Health and Welfare Panel of EFSA (European Food Safety Agency).